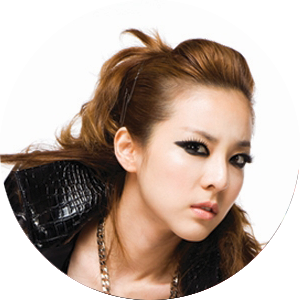 Dara was born in South Korea but moved to the Philippines in 1995 because of her father’s job. That’s why she speaks Korean, Tagalog and English well. She also knows Japanese.

She has a younger brother, who also was active as an idol singer. It’s MBlaq’s Thunder.

Dara was famous in the Philippines first. She entered a reality show (“Star Circle Quest”) in 2004 and became popular. There even was a KBS documentary about her in 2004, called “My name is Sandara Park”.

She finally became a trainee for YG Entertainment in 2007 after YG offered her classes before.

She was the first 2ne1 member, who had a solo song. She released the song “Kiss” featuring her band member CL and the popular actor Lee Minho in 2010.

Dara is also an actress. She had several online dramas. You can see her in the miniseries “We broke up”, as a host in “Get it Beauty (2017)”, in the reality Korean army show “Real Men 300” (from EP 7 onwards) and movies like “One Step” or the drama “Missing Korea”.

She also has a YouTube Channel, called “Dara TV”. She currently uploads travel videos frequently. She seems to enjoy traveling as she was also part of the second season of the travel variety show called “Borrow Trouble” with Eunhyuk (Super Junior) and JR (Nu’est).

Besides being part of the entertainment world as host, actress or singer, Dara participates charity events as well.

Even after officially disbanding Dara is still staying in contact with her former band members. She met Minzy in Manila (Philippines) supporting her performance in 2018. She also supported CL’s collaboration with the Black Eyed Peas promoting it on her personal Instagram account. She posted pictures of her with her former band member Park Bom on her Instagram as well.

We love Dara in the MV for "Come back home"!